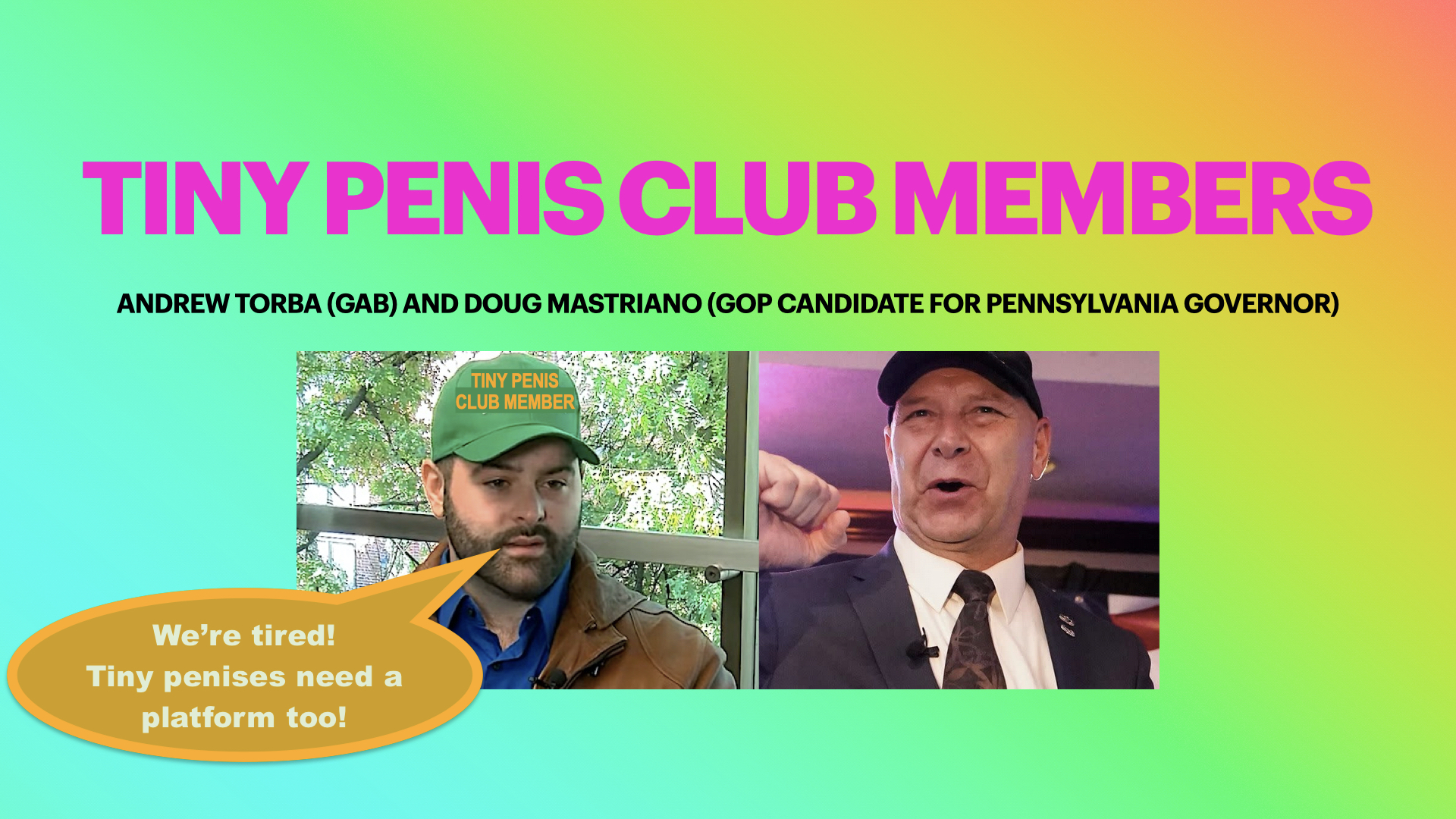 Families of Andrew Torba and Doug Mastriano migrated to the United States during Jim Crow (whites only) for “whites only” policies. During their each of their family’s arrival, non-whites, persons of Jewish faith, and women were denied civil rights, including the right to speak, or be alive, while either could be killed at will, without any laws to protect either.

Let’s take a look at Andrew Torba’s words and actions, and how dangerous both Torba and Mastriano’s extremism is.

“Who Is Gab Founder Andrew Torba? He says he wants to facilitate free speech online. But he created a hate haven for the likes of Robert Bowers,” the Pittsburgh-area Tree of Life synagogue shooter in Squirrel Hill: https://www.huffpost.com/entry/gab-founder-andrew-torba_n_5bd89d70e4b0dee6eececbc5. Torba praised the Tree of Life synagogue mass shooter (a white supremacist domestic terrorist).

Torba, a Trump supporter and self-described “conservative Republican Christian,” has maintained that Gab’s mission is to facilitate free speech online and that supporters of all ideologies are welcome. Nonetheless, Gab immediately attracted users from the far right, including a number of well-known alt-right, extremist, and fringe figures, such as Richard Spencer, Milo Yiannopoulos and Alex Jones, who were losing their mainstream social media platforms around the time Torba launched Gab.

More on Andrew Torba and his inferior intellect, dangerous words and actions.

Torba and Mastriano’s “white fake-Christian identity” and “no Jews allowed” views have become GOP’s standard #Election2022 messaging. Per Torba, all should be forced to live in a white identity, fake-christian society, under laws to be established by Torba via Mastriano. Torba believes that their white identity beliefs, as laws of the land (or state of Pennsylvania), will be a “beautiful thing.” Pretty sick and twisted, mentally ill psychopaths.

Racism and white supremacy are severe forms of mental illness. Both are curable with education and/or mental health counseling. However, Torba and Mastriano oppose accurate teaching of history, as well as healthcare.

Those who don’t learn history are doomed to repeat it. Torba has to learn from experience, and needs to experience the same outcome as Hitler, Smith and Perkins – removed from public, and world, policy.

Torba is also entitled to his free speech. However, Torba needs to understand on whose land he’s standing on and around. Torba should also refresh himself with the US Constitution, which doesn’t state that others should conform to his or Mastriano’s beliefs, BUT that others are entitled to live as they please, without harm to others, or invading the lives of others, especially via legislation. Life, liberty and pursuit of happiness, not white fake-christian identity for all.

What is “funny”, white supremacists lynched Italians, proudly, publicly and openly, during slavery and Jim Crow. Jim Crow benefactors Torba and Mastriano want to return to those days again. 😐🤦🏼‍♂️

What is even more appalling, Torba, through Gab, is using technology we helped to create, to further stall and regress our nation. Not in our world, nor on Our WHIRL!

@peepso_user_38(OurWHIRL Staff)
# How corporate cash could help make an extremist the next governor of Pennsylvania
https://popular.info/p/how-corporate-cash-could-help-make
Mastriano and Torba are both committed to concepts of Christian nationalism, a radical ideology rooted in the idea that God intended America to be an exclusively Christian nation. The New Yorker reported that after retiring from the military and successfully running for office in 2019 that Mastriano "began attending events held by

… Read more
# How corporate cash could help make an extremist the next governor of Pennsylvania
https://popular.info/p/how-corporate-cash-could-help-make
> Mastriano and Torba are both committed to concepts of Christian nationalism, a radical ideology rooted in the idea that God intended America to be an exclusively Christian nation. The New Yorker reported that after retiring from the military and successfully running for office in 2019 that Mastriano "began attending events held by a movement called the New Apostolic Reformation." Members of the New Apostolic Reformation believe "that God speaks to them directly, and that they have been tasked with battling real-world demons who control global leaders." In the legislature, Mastriano has supported a bill that "would have mandated teaching the Bible in public schools."

> During his candidacy, Mastriano has also stated that he wants to ban abortion from the moment of conception with no exceptions for rape, incest, or the life of the mother.
How corporate cash could help make an extremist the next governor of Pennsylvania
popular.info
Gab is a fringe social media network that caters to white nationalists, anti-semites, and other bigots. In October 2018, a frequent user of Gab entered a the Tree of Life synagogue in Pittsburgh and murdered 11 people. The man, who had a verified account, used Gab to post anti-Semitic screeds and preview his attack. "I…
28 July 2022 12:30pm 28 July 2022 12:30pm

@peepso_user_38(OurWHIRL Staff)
# DoorDash is also funding Doug Mastriano! Yes, DoorDash!
> DoorDash sent this statement:
> > We have contributed to and supported a variety of organizations and causes, including both the RGA and the DGA, in pursuit of advocating on behalf of Dashers, merchants, and customers. We'll continue to engage with lawmakers and other decision-makers who influence policies that impact the communities we serve.
28 July 2022 12:47pm 28 July 2022 12:47pm