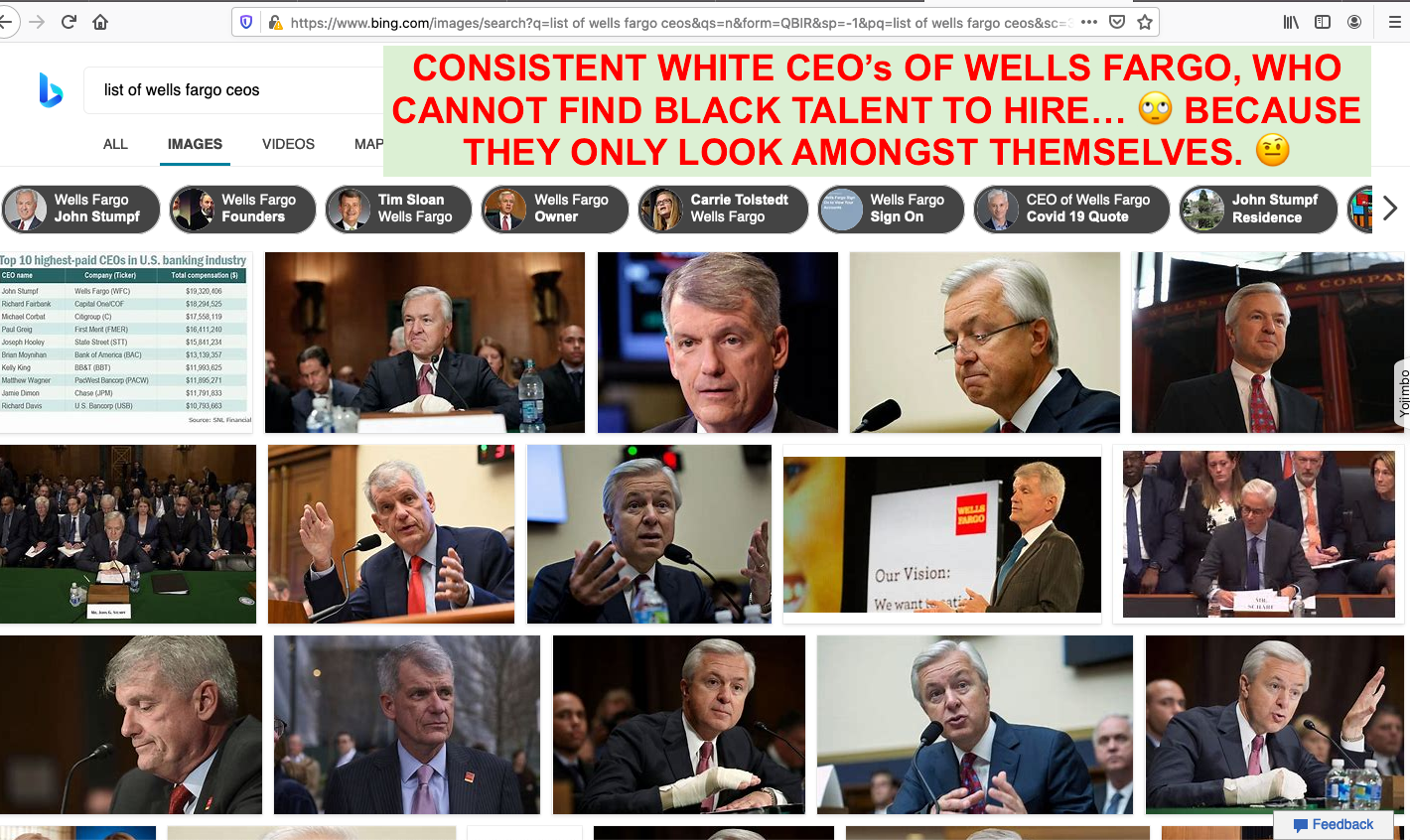 We started this site because we told you that you cannot fund the problem, THEN, expect the change you want to see. Search for CEOs of Wells Fargo, since its incorporation. Let’s make the results easier for you: search for black Presidents of the NRA. 🤨 Meanwhile, where Harriet Tubman made her final stop, St. Catherine’s, Canada area, black CEOs, financial officers, and more exist.

Systemic racism on display via Wells Fargo, which launched off of the backs of slaves (accepted slaves as collateral for loans to plantation owners). Meet current Wells Fargo CEO, Jim Crow Benefactor-Charlie Scharf:

“While it might sound like an excuse, the unfortunate reality is that there is a very limited pool of black talent to recruit from.”

Charlie Scharf is CLEARLY NOT looking DIVERSELY, given HBCUs graduates and alum, and/or hiring managers are dismissing TALENT upon arrival.

And “funny” 🤨 how Wells Fargo didn’t have a problem finding “talent”, when helping to insure and further slavery. And clearly Wells Fargo doesn’t have a problem finding its cleaning staff for their offices or luxury homes built from backs of slaves and systemic racism. In fact, Wells Fargo CEOs go out of their way to ensure non-whites are hired and maintained for subservient roles (systemic racism). But, Wells Fargo just cannot find the talent to manage their money, which is the same exact mentality as #badgradestrump, who will never allow a black person to manage any of his companies, and especially not his money, while “#blacksfortrump, #blackvoicesfortrump (including now dead Herman Cain), #walkaway, #blexit make excuses for their masters.

TAKE YOUR TALENT AND BANKING FUNDS AWAY FROM WELLS FARGO! Else, you’re funding systemic racism, directly!

Wells Fargo is also the same bank which consistently turns down black applicants for loans, scrutinizes their applications, and in the process, prevents black families from sending their children to college, owning a business, or even being in a stable and owned-home, to become the “talent” Wells Fargo claims it cannot find. 🙄

More on the audacity of mediocre, which claims it cannot find black talent. 😐

Strange how the audacity of mediocre were all accountants and economists while President Obama was in office, but not one among them now! 🤨

💯 Investment did not boom and workers will not see the promised bump in pay.

💯 The richest Americans instead got even richer while corporations used a lot of the new money to keep shareholders happy.

10 Institutions You Didn’t Know Had Ties to Slavery | https://www.msn.com/en-us/lifestyle/career/10-institutions-you-didnt-know-had-ties-to-slavery/ss-BB18yLMF#image=6