Twitter has now officially confirmed it’s NOT for this COUNTRY, Twitter now represents all that this country has fought against: confederates/kkk, nazis/neo-nazis, white nationalists.

How progressives think they can accomplish ANYTHING on Twitter, with white nationalists shouting at them, or gang reporting them to “silenced” or “restricted” status is beyond me.

And now, Twitter is continually verifying white nationalists, domestic terrorists and other hate accounts while doing nothing about their harassment, and while suspending progressive journalists, OR restricting their visibility, while lying to US congress/senate about Russian ads Twitter profited from. Twitter even verified a white nationalist, who sent a bomb threat to MadeInBlueUSA’s founding member! Twitter saw no wrong doing in the bomb threat, BUT then placed MadeInBlueUSA’s founding member’s account status into restricted/censored status, while assigning one employee to monitor each and every tweet, while letting white nationalists, kkk and Pussy Grabber *rump to run wild and uncensored on Twitter!

Twitter was recently broke, unsure its company would sustain another year. Now Twitter has a new PAC, a PAC used to donate funds to #TrumpRussia obstructionists, Chuck Grassley and Mitch McConnell. But imagine what can be done with users’ IP information, especially with the Department of Justice requesting IP information of #Resistance members already, and imagine how EASILY that information can be handed over to Chuck Grassley or Jeff Sessions, especially given Pussy Grabber is paranoid and wants to know who’s saying what about him because of so much fraud to cover up!!

DEACTIVATE YOUR ACCOUNT NOW!! Or remain on Twitter and be a part of the problem! White nationalists need us more than them! Without us present on Twitter, they’d just be shouting at themselves as their daily goal: find out what progress we’re making, THEN work to obstruct or terrorize persons behind the progress!!

Twitter: Oops! Did We Accidentally Verify a White Nationalist? Our System Is Broken. We’ll Fix It. ‘Soon.’http://www.theroot.com/twitter-we-won-t-allow-hate-groups-on-our-platform-al-1820275154

About the author: madeinblueusa.com WHIRL

Put your money where your priorities are!
www.madeinblueusa.com®

@peepso_user_9(madeinblueusa.com WHIRL)
Twitter's response is a day late and a dollar short, given David Duke, Richard Spencer, Geert Wilders and other white nationalists roam freely without any retribution on their site.

@peepso_user_9(madeinblueusa.com WHIRL)
After Twitter rolls out its new rules, things are pretty much the same! Joy Ann Reid attacked viciously, including by Nick Searcy who unleashed a nest of vile attackers. The attackers accounts, including Nick Searcy's are still active!!

Gee, @joyannreid, am I bothering you? Block me, loser. I’m just answering the idiots who swallow the bile you spew. https://t.co/a4jkfTJfd7
— Yes, Nick $earcy! (@yesnicksearcy) December 24, 2017

Verified account of Nick Searcy attacking Joy Ann Reid (journalist) and displaying non-stop vitriol against Democrats, or as Searcy calls them, "The Left". This is also an example of Jack Dorsey's "obey nigger obey". 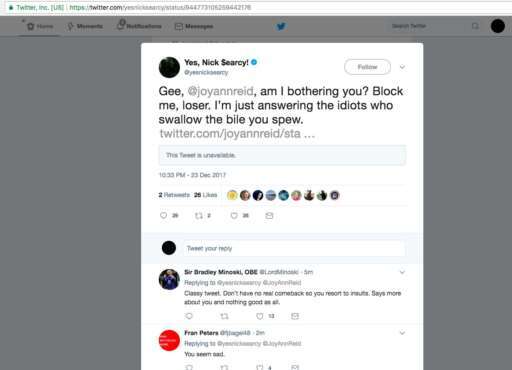